Herringbone floorings: an elegance from another time, yet timeless

Since its ancient beginnings, the herringbone floorings are considered one of the most refined, elegant and striking laying patterns. They are once again having a real moment of glory. It is indeed much sought-after by those who love a traditional parquet flooring, but also by those who search for a dash of creativity and motion in their furnishing style.

Click on the pictures to read the technical features of the herringbone floorings by prestigious Tuscan company I Vassalletti: 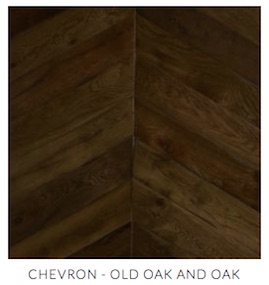 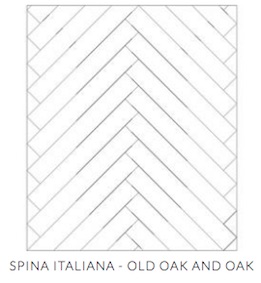 Herringbone floorings: how to choose the laying pattern

Besides the colour, the type of plank, the wood type and the finish, it’s also essential to choose the laying pattern carefully, that is how the wooden planks are going to be laid in order to get a specific geometric pattern.

There are numerous laying techniques for parquet floorings. Choosing the parquet laying pattern, which is obtained by placing side by side the wooden planks that the flooring is made up of, is a fundamental aspect that must be considered at the time of purchase, and that enriches and adds value to the rooms.

The direction of each wooden plank and the laying pattern of the wood flooring affect the room’s aesthetics and significantly contribute to connoting the style of the household rooms. And, in addition to being an aesthetic choice, it’s also a functional choice.

The herringbone pattern is one of the most elaborate, spectacular and striking laying techniques, and, as the name suggests, it consists in placing the wooden planks so that they are perpendicular to one another. The resulting pattern resembles the skeleton of a herring fish and is altogether regular, but it creates a visual dynamism that will amaze even the most demanding connoisseurs.

The herringbone pattern is the protagonist of wood floorings in the most sumptuous royal palaces, such as the Palace of Fontainebleau. The herringbone flooring trend has made a comeback among the interior design fashion solutions lately. It’s a decorative solution that adds value to the wood’s natural veins and makes the rooms look larger.

Herringbone floorings can create regular and mesmerising patterns and can have different features depending on the angle between the planks. Let’s go into detail about the characteristics of Italian herringbone and "chevron" floorings, the latter being a variant in which the planks’ short sides are cut at a 45 or 60-degree angle.

Chosen for no less than the Deluxe Suite of the prestigious Seven Stars Hotel in Milan, the elegant and refined Italian herringbone floorings are once again having a moment of glory.

The Italian herringbone laying technique consists in installing the single wooden planks so that they are perpendicular to one another, thus forming right angles. The wooden planks all have the same length and width, and are placed in order to form 90-degree angles. The orientation of the pattern can be perpendicular, parallel or oblique to the walls. Therefore, the direction of the bone can be parallel or diagonal.

We offer the Italian Herringbone model in the Historical Floorings collection, which is inspired by the most important residences of classical antiquity, by using recycled solid wood hand-sanded by skilfull artisans.

Italian herringbone floorings are traditionally used for luxurious interiors and are much sought-after for both classical and modern style rooms.

From Armani stores to the most luxurious hotels in Milan, the sophisticated and versatile chevron laying pattern is much sought-after for highly prestigious locations at the moment. The Chevron pattern is included in the Historical Floorings collection by Tuscan company I Vassalletti, and was used in no less than the halls of the Palace of Versailles.

A valuable legacy from the French Renaissance, the chevron pattern, also known as point de Hongrie, literally “Hungarian point”, became a must-have during Haussmann’s renovation of Paris in the 19th century, and arrived to the present day, elegant and refined now as then.

The wooden planks have a peculiar shape: the heads are indeed cut with great precision to obtain 45 or 60-degree angles. The resulting elements are laid head to head, thus forming continuous lines that lend a sense of spaciousness and directionality to the room.

Whereas when laying Italian herringbone floorings the wooden planks are installed without being previously cut.

Widely popular in prestigious middle-class residences during the 18th and the 19th century, chevron floorings create a charming play of inlays. Maison I Vassalletti offers an oak chevron model, hand-sanded by master craftsmen and finished with natural oil and wax colours.

For the Italian herringbone and chevron patterns it’s usually advisable to choose premium-quality planks without knots, in order not to weigh down a pattern that is already quite elaborate.

For narrow spaces such as entryways and corridors we suggest you place the wooden plank’s longest side in the wall’s direction. Also consider lighting. Matching the direction of the parquet pattern (or engineered herringbone parquet floor) with the direction of the light beams entering the room will contribute to making the place look bigger and more spacious, as well as highlighting the wood’s veins.

In small locations, laying the planks in the direction of those who enter the room lends a sense of continuity with the doorway, thus making the room look bigger. Resorting to an Italian herringbone pattern or a chevron pattern helps make small rooms look bigger thanks to symmetrical repetition which conveys a sense of depth and modifies, in a way, the perception of space and of the room’s actual sizes.with the direction of the light beams entering the room will contribute to making the place look bigger and more spacious, as well as highlighting the wood’s veins.

The herringbone and chevron patterns generally require more time to be laid compared to a simple ship’s deck pattern or brick pattern, as well as greater manual skills, mastery, attention and experience. Herringbone and chevron floorings require great precision during installation and high-quality materials to get the desired effect.

Contact us for a customised consultancy. We will suggest the most suitable solution for your home.

Do you want to take a look at the I Vassalletti herringbone floors? We refer to the following images: 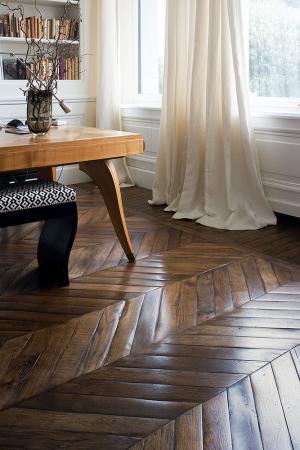 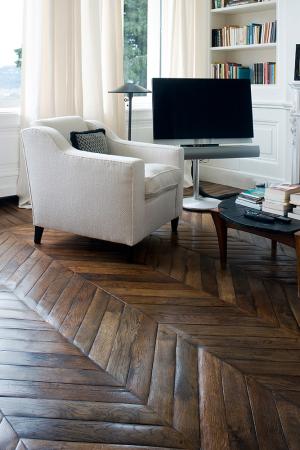 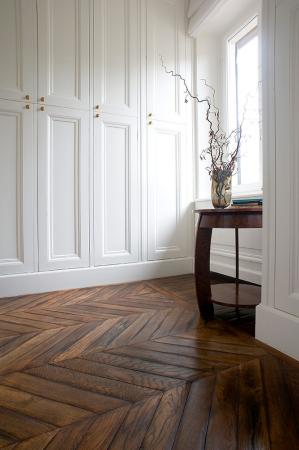 Read the other blog articles:

Latest news on I Vassalletti:

Previous
All News
Next